Last week was a tremendously BIG week for us!!

First, Jonathan celebrated his 30th birthday...and boy did his birthday keep on giving. First, I surprised him with THE television he's been lusting after — and this was after I had thoroughly convinced him that a tv wasn't in the cards. Then we scheduled an ultrasound and learned the sex of our baby. Afterward, our wonderful community group from church surprised Jonathan at a local Mexican restaurant to celebrate his birthday. Poor thing, he's not used to being fussed over, so his first inclination was to think that our community group just happened to be dining there and that we stumbled into them. So humble it's cute!! :-)

Ok, now back to baby talk.

We found out that we're having a baby GIRL!!! We could not be more excited. We wanted a healthy baby first and foremost, but I think we both secretly (or not-so-secretly) wanted to have a daughter first. Don't get me wrong, I've never been a fan of pink or frilly, but I am so looking forward to being the mother of a daughter — and ESPECIALLY of seeing Jonathan with his daughter (my heart won't survive). I'm equally terrified because I will want to protect her from everything even though I know that's impossible.

The moment we found out the sex it was time to hit the ground running on a nursery. This weekend we (Jonathan) started ripping the crown molding out of the room. Can you say BIG MESS???!!! Looks like we'll be calling in a contractor...

We also think that we've named our baby. In fact, we're pretty sure — we're just test driving the name for a bit longer before the big reveal :-) You'll just have to be patient.

This weekend my parents visited from SC and Jonathan's parents and grandmother came over to our place to belatedly celebrate his birthday. We grilled out and had a BLAST!!

Here's me with my parents: 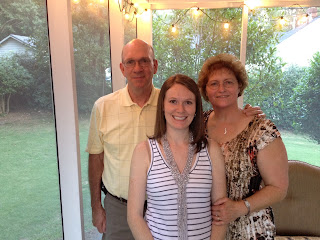 Jonathan's gift from my parents was the pantry that my dad has been slaving over for months now. I had the vision for this much-needed pantry and my dad came up with the plans for it after I became frustrated that I couldn't find anything I liked in a store! 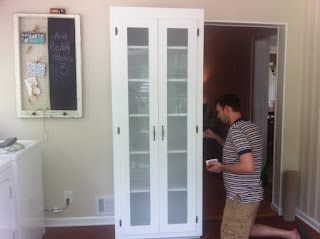 Here's some more goofy randomness from this weekend: 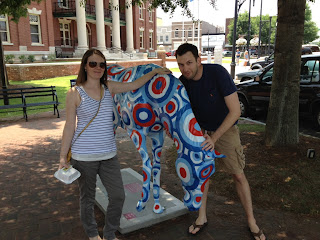 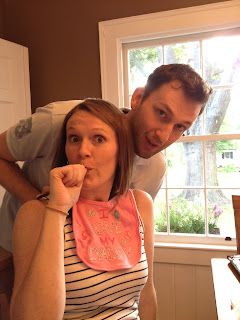 (I was testing out the "I love my daddy" bib)


Here's my fave ultrasound pic of Nugget (sorry it's a cell phone pic, we don't have a disc): 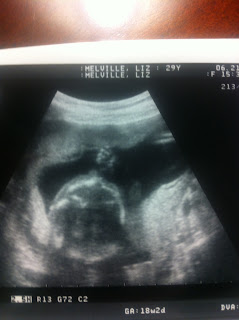 So many things to look forward to! Thanks for sharing in our joy :-)
Posted by Elizabeth at 8:38 PM

Elizabeth
There are folks who present the world as rose-colored. I’m not one of those people. I’m striving to blog truthfully about my failures, successes, life lessons and constant, daily battle to live out a Christian life. You can expect to laugh and cry and, at some point, beg me to fill the prescription for crazy pills that my doctor wrote me “just in case.” This is reality — or the way I see it, anyway!

Wife to Jonathan; Mommy to Nora 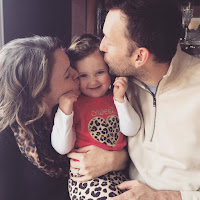